Nella Aarne
Alchemical Messengers; and the House of Ill Health 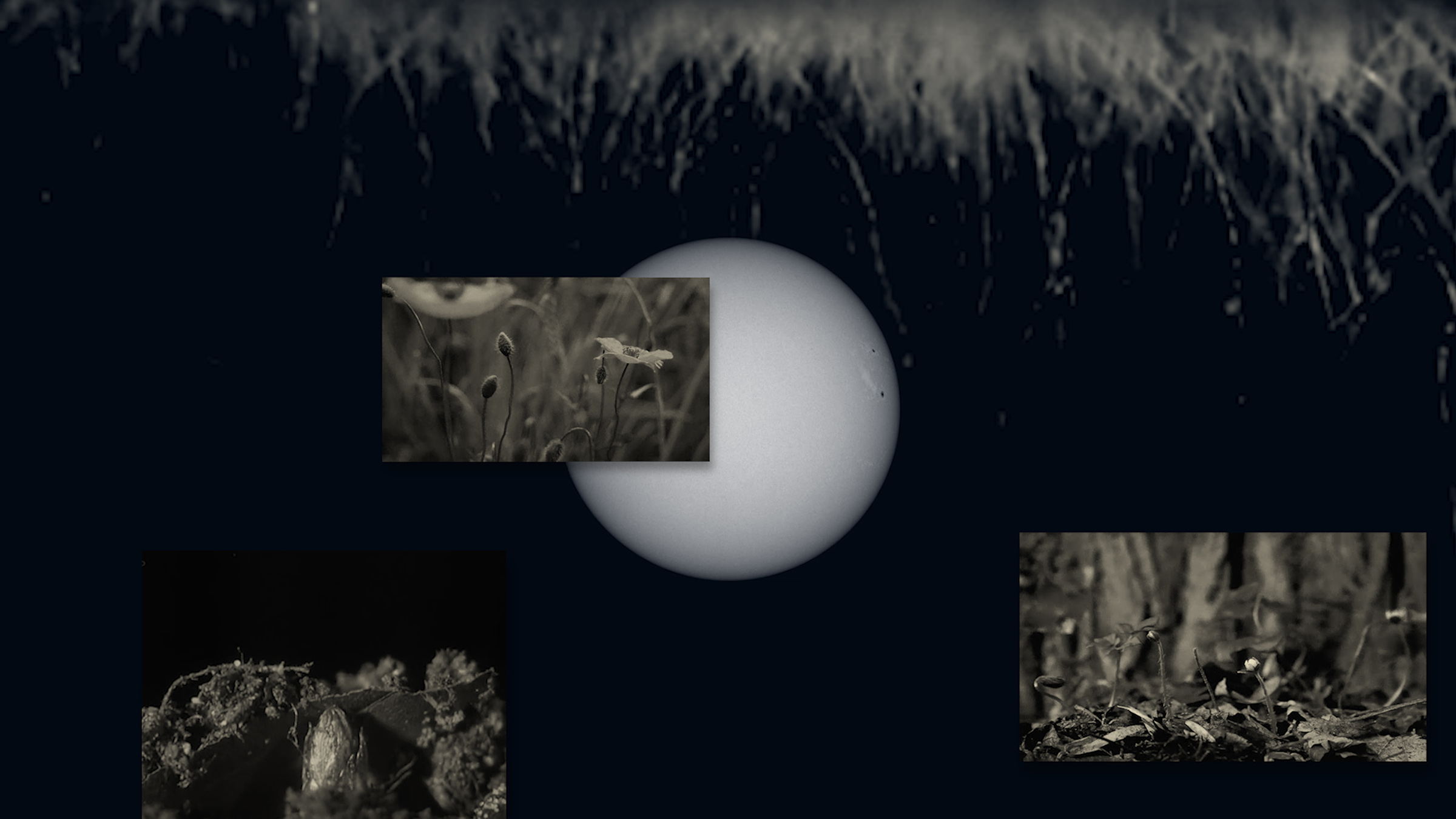 
We are encased in broken shards of cinnabar, surrounded by calcium silicates, aluminates and ferrites. The materials of our confinement, with their prehistoric lineages, have been drawn together by human hands. After a dormant century of uneventful ebbs and flows, we feel a primordial pull towards the ocean floor. From within our enclosure we prise open a hairline crack to forge an escape route. We expand, we shift downwards, time passes. The fissure takes us to a deserted space below, where companionships of metals, minerals and hardened cellular structures dwell. We discover marble atop chromium; tungsten twisted inside chambers of argon; and resin on white oak. The sun filters through transparent membranes of silica, and sparks daily changes in the atmosphere. We turn our attention outward, where cliffs shaped by an ancient continental collision drop steeply into the Mediterranean Sea.

I feel the coldness of a foreign presence weighing in my bones. It was only a matter of time; I have felt sick for a while. A suspicious crack has formed in one of the concrete slabs in the ceiling of my living room. At first I thought nothing of it, but over the years it has crept and widened, as though gravitational forces have been splitting me apart. The central path of the crevice now spreads across my entire roof, from the bedroom in the West to the staircase in the East. I am deeply unsettled by the gash, and its growth has caused me endless anxiety. Finally this afternoon, I discovered the source of my bad health. The invasive opening has disclosed a rille of silvery-white liquid that glimmers with other-worldly iridescence. I can’t stop thinking about it. How long has it been here? How much of it is there? I am convinced that this parasitic fluid is drawing life from my core.

We respond to a vital summons from within the primeval basalt, exerting our atomic weight on the unsuspecting material around us. Mirroring aeons of lithospheric activity, we shift particles within the concrete that contains us, and the horizontal plane splits into three architectural tectonic plates. We gather at their point of convergence and descend past the dust of limestone and cement. We conglomerate and hang heavy, emerging from a fracture three meters above an oak mosaic. A single drop begins to form. The temperature of the space oscillates. The drop gathers form. Layers of dust dislodge and float past us, accumulating below. After one full lunar cycle our drop separates. Divided, it cuts through space and lands heavily on the resin coated wood. The impact of our density moulds the ground beneath us. We erode its shine and seep into its pores, expanding outward through a web of cellulose fibers in the heartwood. Traversing every pathway and entering every chamber, our molten capillary threads become the nervous system of our host.

I feel sick and terrified in the face of my own destruction. The bizarre entity cracked my bones and dripped out like thick marrow. After seven sickening years, the ceiling gave way entirely and the argentine thing plunged to the floor in a downpour of dust and debris. The disgusting liquid metal landed with a thunderclap; it seeped through the fibres of my parquet flooring; it spread deeper and deeper into my foundations. What is left of my now broken skeleton stands feeble and precarious. The cold flowing mass is everywhere! It glints harshly in the sunlight as highlights of black snake across its surface like the patterns of a river delta. The weight and force of the quicksilver is so fierce that it seems unstoppable. Room by room, atom by atom, I am invaded. Large sections of my structure collapse sending chunks of concrete, steel and slate tumbling down the cliffs into the sea. There is no hope in the midst of this architectural avalanche. Farewell!

Epochs come and go, blurring into a seamless continuum, as waves of erosion and growth alternate on the Earth’s surface. The structure that formerly held us is a distant memory as we descend through the geological strata. We decipher the intricate designs of our surroundings and dismantle synthetic materials, returning their parts to elemental states. Our duty is to reclaim the remnants of past existences that scatter the sites of decomposing ruins. We embolden dormant forces within vibrant forms by radically reorganising their mineral configurations. From the shell of an archaic but extant thing we pull twisted threads of gold and zinc, of platinum and palladium, of copper, cadmium, tantalum and iron. Gases of nitrogen, chlorine, carbon and phosphorous escape through pockets of air and return to the atmosphere, whilst arsenic, boron and silicon are refined into brittle shards. The soft forms of lithium, tin, lead, gallium and aluminium react to form stable compounds in the terrestrial topography. In the sky above, a black sphere drifts across the surface of the sun. Time floats forward, things disappear, others emerge, new bonds are formed.