Nella Aarne
The Common Matter that Makes Our World 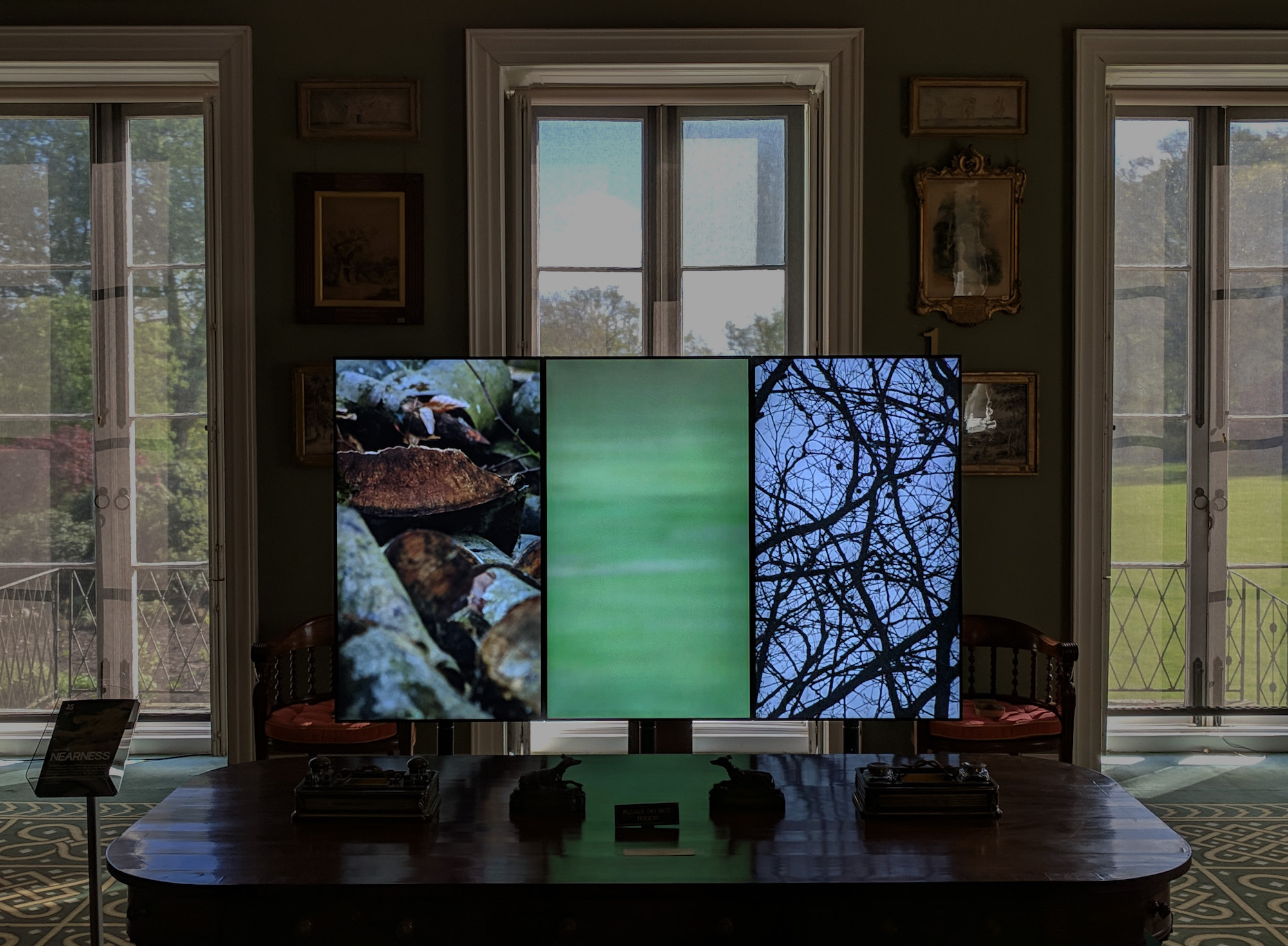 
Text first published in
The Making of Nearness
National Trust
2019

Nearness, artist and filmmaker Sam Smith’s commission for the National Trust at Stourhead, delves into the intricate web of life forms, matter and daily practices of care that contribute to the microcosmic ecologies of the Stourhead Estate. After eight months of researching and filming the human and more-than-human lives that animate the historic site, Smith presents a three-channel video installation in the library of the main house, a Palladian mansion, and an augmented reality intervention in the Pantheon, the largest of eight follies in the landscape garden.

Diverting from the notion of human creative genius, the project communicates the practices of making and preserving the worlds that we inhabit as a collective multi-species pursuit. The augmented reality view of the Pantheon brings apparitions of plant life to float among the statues of classical deities. In the film, perspectives shift from expansive aerial views to submergence in the garden lake to the minute scale of crawling insects. Conservators cleaning and restoring artefacts in the library are accompanied by lady bugs, while gardeners roam the grounds among plants, fungi, insects, birds and deer — all in an infinite dance of affecting and being affected by one another, choreographed by the elements and the changing seasons.

Nearness is not only proximity in space, but also alludes to the closeness of a relationship. When we are near an other, we may share a likeness, maybe even a sense of kinship, a physical bond. In Smith’s work, to be near is to share a sense of belonging to a common matter that makes our world. Within that world everything is constituted in relation to boundless other beings, forms of life and non-life, that together create a complex and constantly evolving network of socialities that extend far beyond human intention or involvement. Like rocks are transformed by water and wind, plants and fungi adjust their physical form throughout their lives in reaction to their environment, growing their way into new relations with other beings (Tsing, 2014).

The film documents a conservator in white gloves winding clocks on the cusp of spring, a meticulous gesture evoking human ideals of preservation and literal command of time to start a new controlled cycle of growth and decay. When humans take on a custodian role to preserve or restore a landscape, conscious decisions are made about which life forms are protected, often at the expense of others. Hence the mundane yet diligent processes of care — the endless dusting, planting, pruning, digging and examining — are also wrapped up in urgent questions of life and death.

Yet humans are not the only keepers of Stourhead. Although the human vision for the estate is enacted daily, there are boundless other narratives of survival at play within its workings. Indifferent to grand plans of conservation, the immense array of its inhabitants will continue to entangle with and claim space from one another, bringing some lives to an end while allowing others to begin. Stourhead may have originated from human creative ambition, but it is a collectively achieved composition of intertwined lives, extending from the lives of centuries past to the ways of life yet to be made possible by the more-than-human relations of today.